At AMADEUS International School Vienna we are delighted to celebrate the incredible accomplishments of our students. It is exciting to see what students achieve with the skills they have learned at AV. We are proud to share a the recent accomplishments of Brendan Goh, who is in grade 12 at AV while also completing his second year as an undergraduate at The Music and Arts Private University of the City of Vienna (MUK).

Brendan Goh began his professional career as a cellist in 2014 with the launch of his CD  “Moments of Youth” under the ARS label. In his role as an AMADEUS Music & Arts Academy (AMAA) Jr. Ambassador, he performed alongside AV students and AMAA Ambassadors at the annual GALA Concert in the Musikverein Vienna on January 24th. The very next day he took part in the Prima La Musica Vienna competition for talented young musicians. Goh was given an exceptional score of 96,25 points for his performance on the cello and was awarded first place for his age group, IV Plus. As the winner of the Prima La Musica Vienna for cello, Goh will represent Vienna at the national level competition in Tyrol in May.

Goh was also featured in a recent radio interview by the Radio Klassik Stephensdom. He was selected by Professor Lilia Schulz Bayrova to represent MUK and its students.

Congratulations to Brendan, you serve as an inspiring example to current and future AV students. We wish you all the best in May and look forward to hearing about your future accomplishments! 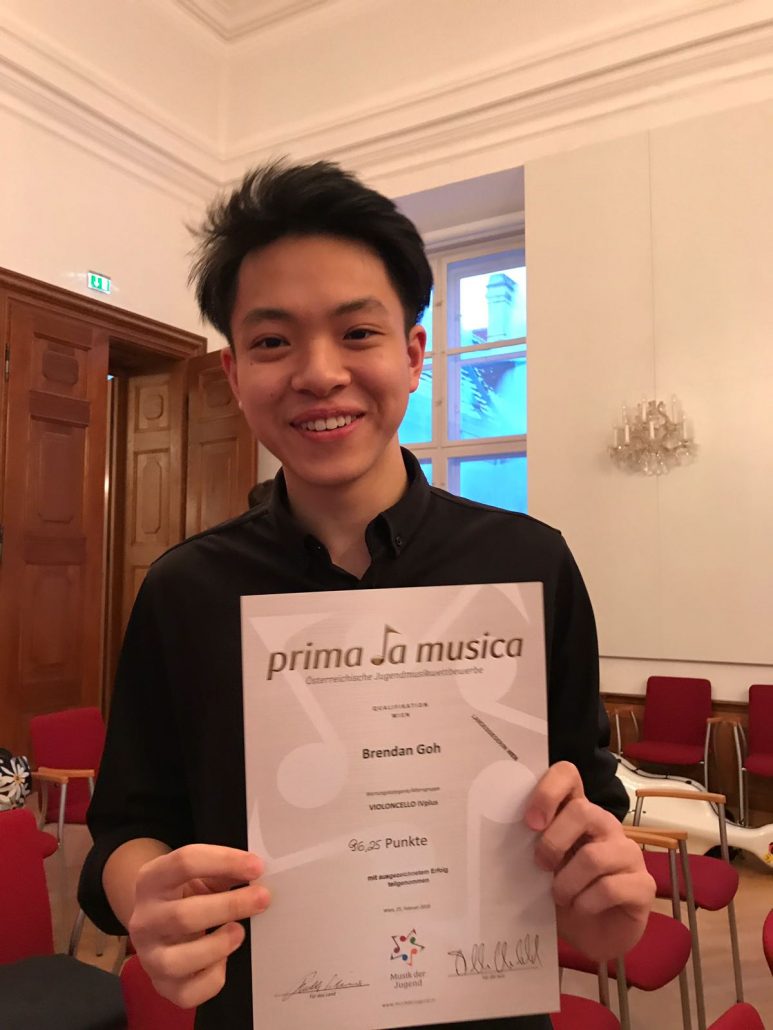 This site uses cookies. By continuing to browse the site, you are agreeing to our use of cookies. Please find more information on that topic here.

We may request cookies to be set on your device. We use cookies to let us know when you visit our websites, how you interact with us, to enrich your user experience, and to customize your relationship with our website.

Click on the different category headings to find out more. You can also change some of your preferences. Note that blocking some types of cookies may impact your experience on our websites and the services we are able to offer.

These cookies are strictly necessary to provide you with services available through our website and to use some of its features.

Because these cookies are strictly necessary to deliver the website, refuseing them will have impact how our site functions. You always can block or delete cookies by changing your browser settings and force blocking all cookies on this website. But this will always prompt you to accept/refuse cookies when revisiting our site.

We fully respect if you want to refuse cookies but to avoid asking you again and again kindly allow us to store a cookie for that. You are free to opt out any time or opt in for other cookies to get a better experience. If you refuse cookies we will remove all set cookies in our domain.

We provide you with a list of stored cookies on your computer in our domain so you can check what we stored. Due to security reasons we are not able to show or modify cookies from other domains. You can check these in your browser security settings.

We also use different external services like Google Webfonts, Google Maps, and external Video providers. Since these providers may collect personal data like your IP address we allow you to block them here. Please be aware that this might heavily reduce the functionality and appearance of our site. Changes will take effect once you reload the page.